When Press Releases Cross The Line And Become Social Media

As long as press or media releases were one to two-page news item updates delivered directly from the source to the media outlet, they were clearly just what they professed to be: an information release to the press.

Then someone who was tired of expending the time and money it took to send a release to everyone on a media list (a list that could be quite lengthy depending on your content and desired market exposure) had a better idea. Instead of mailing the press release to a reporter who was equally as tired of sifting though envelopes, why not distribute it via email? And from emailed media releases, the leap to distributing them en mass, online, is a very short one.

At the point that both free and paid media release services came into existence, the entire dynamic of the media release changed dramatically. Instead of submitting a release to just members of the press as a preparatory piece of information needed for the media to write and prepare the news story, internet distribution of the release itself meant that the release ‘became the news story’. In a cyberspace second, press releases transitioned from preliminary information to target information, which could (and would) be accessed by anyone with an internet connection. They are downloadable, linkable, and viral. Electronic media releases allow you to communicate to your market, add links to other internet content, photos, videos, attachments, and—(and this part is important) to begin a conversation with the reader, who cannot respond to you on the release, but can respond to you via all the sources your well written release directs him to (such as your blog, Twitter account, Facebook page, etc). In many valid ways, press releases distributed online are now as much a form of social media as is your blog or the information you post on other platforms. We just don’t tend to think of media releases, or use them, with this thought in mind. 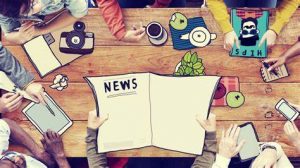 Yet the very thing that makes internet distribution of press releases so effective is also what makes them challenging. In the old days of press releases mailed or faxed to media outlets, the writer of the release knew his audience; he knew he was targeting his release to capture the interest of the reporter or editor who would then filter and control the distribution of the information to the public.

Internet distribution of media releases now means that at the same time the writer of the release hopes to entice someone in the media to further distribute the news item, the writer must also be crafting the document in such a way that the interest of all of the online public who views it directly in release format will also be engaged. The target market of media releases went from being ‘reporters and editors’ to being ‘reporters, editors, and the entire rest of the internet-accessing planet!’

In much the same ways as social media-zation has opened doors for consumers to shape and control marketing and advertising, online distribution of news items allows for the circumvention of the traditional press. News makers connect directly with the news viewer/reader who has the future opportunity to exponentially propagate the news information within his or her own networks of contacts.

If you are not taking advantage of internet distribution of your newsworthy items, you may be missing a very effective way to share your message. A quick internet search will help you identify many sources who will distribute your media release online at no cost to you. Some are more effective than are others. Keep in mind that many free media distribution sites involved the addition of advertising on the page with your release. Typically this is not advertising you can control or refuse unless you choose to distribute your release via a paid service such as PRWeb, Marketwire, or similar media outlet.

The vast but still barely tapped potential for online press releases is a topic with lots of related information. Look for more blog posts on this subject as we share some of the ins, outs, and insider tricks of the new media tool of online press release distribution.